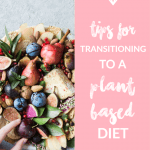 If you had asked me 10 years ago if I would be on a primarily plant based diet, I would have laughed in your face! I was very much the “must eat meat at every meal” girl. I mean, I’m from Brazil. Do vegetarians or even vegans exist down there? 😉 But here we are and I would love to share you my tips for transitioning to a plant based diet if you’re interested in changing your lifestyle or even wondering if you could make the switch.

**This post may contain affiliate links where I may make a very small commission if you buy from my link.  Best of all, it doesn’t cost you any extra! I appreciate your support very much!**

Like I said, I never thought I could sustain this lifestyle. And okay, it’s only been almost 2 months since I’ve made the switch and to be completely honest, I am not 100% vegan or whole foods, plant based. With that being said, I’m currently not in the mindset to be 100% vegan but more like 90%. Why? Well, I realize that as life happens, you may be out for dinner and a vegan option may not be available. Or I don’t want to go to my parents house for dinner and force them to make me a vegan meal just for me; I will eat what my mom makes. But at home, I am definitely eating a plant based diet though I am currently finishing up the existing products I do have that aren’t vegan. Think chicken and beef stock. Or even parmesan cheese. And oh yes, my Vital Proteins collagen. I had bought a tub not too long ago and I’m not going to waste it.

I had actually flirted with the idea of going plant based for quite some time but I could never commit. Rather, I didn’t want to commit because frankly I wasn’t sure what I would eat. I mean, I do love veggies but the idea of eating just a plate of broccoli wasn’t particularly enticing. And what would I eat for breakfast if I can’t eat eggs?

Last year, I attempted to take it slow and hop on the Meatless Monday trend. Well, I went to the supermarket and wandered around the aisles wondering what the hell I would eat. I didn’t even last 10 minutes before I went to the meat aisle and bought some chicken. Or maybe it was ground beef. Fail!!

So how did I do it? Here are my tips for switching to a plant based diet, or a vegan lifestyle or even if you just want to be a vegetarian!

I bought my first vegan cookbook – The First Mess by Laura Wright – and flipping through it, I knew there were a lot of recipes I wanted to try, completely forgetting that these recipes were all meat free. I especially love the Soups & Stews section in this cookbook. She’s even got a blog with loads of recipes if you don’t want to commit to a cookbook! Which takes me to another point, Google is your friend. There are a load of vegan bloggers out there all concocting delicious recipes. Or even through Facebook and Instagram!

The picture below is the Weeknight Root Vegetable Dal from the cookbook and was perfect for a cold, winters night! So tasty too. I joined the Clean Food Dirty Girl Facebook Group before I made the transition and it was eye opening. These ladies were all making what looked to be super delicious meals and it really made me realize I am not going to have to eat a plate of broccoli every day.

Let’s face it. It’s always easier to do something when you have someone backing you up. Luckily for me, K was also on-board with this journey so we were able to do it together and there were no fights about what to eat. Well, actually, we always fight about what to eat because I’m so picky and I’m very strong headed on what constitutes dinner. Hehe

Okay, duh. But like I said, I couldn’t imagine having dinner without eating chicken or a steak. So instead of just eating a plate of vegetables, I made one of the soups from The First Mess. It was a creamy jalapeno corn chowder. It was absolutely ah-mazing. And then I realized, I just had a meat free dinner. That’s when the penny dropped. I AM capable of eating meat free meals. I’m sure you’re capable too if you really think about it.

From there, it was easier to keep going and I was excited by all the recipes in the book, so we just kept making them. This isn’t a race. Go slow. By making little changes that you won’t notice, you’ll get there in no time. And by these little changes, start with the obvious. Milk. For me, this was honestly super easy because I don’t really like milk to begin with, but I would take milk in my flat whites. And I wasn’t too keen on soy milk or almond milk in my flat whites. So I just took out flat whites altogether. HAHA Just kidding. Actually I’m not but going plant based was not the reason why I stopped drinking coffee.

If you really want to know, I stopped drinking coffee (for the most part) because when I switched to a new job in Singapore, the office was based out in the hinterlands and there was no good coffee to be had. So instead of spending $5 every morning on a shitty flat white, I started drinking tea instead. Now and again, I will have a coffee and I do love me some lavender lattes.

But anyway. Swap out your milk for your favorite non-dairy milk. After a lot of trial and error, I can say that Milkadamia is my favorite. I use it to make my overnight oats and my protein smoothies.  Or swap out your normal butter for a vegan butter – I like Earth Balance but I want to try Miyako’s Creamery.  I’ve switched to a vegan protein powder. I’m currently drinking Orgain Organic and it’s actually pretty good! And there are of course vegan meat options for you to try. And if you think about it, Mexican food is pretty vegan friendly! 😉

THINK ABOUT WHAT YOU CAN EAT

Our brain doesn’t deal well with loss. I know if you tell me I’m not allowed to do something, I’ll definitely want to do it. If you tell me I can’t eat something, damn right I’m going to go eat it. So don’t think, “Shit, I can’t eat beef. I can’t eat chicken”. Think about all that you CAN eat. And this loops back to my first/second point, go find some recipes that sound amazing to you! Try them out. I recently made a vegan mushroom strogonoff and man, I was blown out of the water. It was soo good. Who knew that a few simple ingredients made for a tasty dish? Okay, it didn’t taste exactly like a strogonoff but it did the trick. It satisfied my craving, so hey! I’ll take it!

Most importantly, have fun with this! Enjoy trying new things! The newest things in my pantry has been nutritional yeast – who knew this could be quite tasty! – and cashew butter. And these two ingredients were the main ingredients to my vegan mushroom strogonoff and this white lasagna soup I made.

And if you still end up eating something with meat, oh well! The world didn’t end. And honestly, if I really, really want a Chick Fil A, I’m going to eat it and be done with it.

My takeaways from being mainly plant based for two months:

Since I’ve been cooking 95% of my meals and I know what’s going in them, I’ve actually lost 10 pounds in two months though I am working out and I was working out beforehand as well. I now realize how much shit we were eating before and we were eating out way too often.

I actually don’t miss meat as much as I thought I would. Sure, there are days when I really fancy a rotisserie chicken, but for the most part I don’t feel the need to eat meat.

I had the biggest sugar cravings all of last year. I could not get enough cakes or cupcakes or whatever. I was never one to have a sweet tooth, but man oh man, I would ask without fail after dinner what dessert was. Since I’ve embarked on this journey, I can honestly say my sugar cravings have plummeted. Sure, I still may want a slice of cake now and then, but it wasn’t like I HAD TO HAVE IT. I can ignore it is what I’m saying. And hells, if I really want a slice, then I’ll have it and I won’t beat myself up over it.

I was farting, a lot. HAHA Well, let’s be honest here! But now it’s died down. 😉 And since I’m eating a lot more fiber in my diet, my bowel movements have become more regular.

So there you have it. If you’re considering going vegan or plant based, I hope my tips for transitioning to a plant based diet works for you! Or if you’ve already embarked on this journey, what worked for you?

ICL Surgery: What I Wish I had Known