Durian tasting is not for the faint of heart. But then again, maybe I’m just a wimp? But really, before I begin, let’s get back to basics. For my readers in the US and the UK, do you even know what a durian is? I had never even heard of durians until I moved to Singapore, so I’m going to guess that you don’t!

Have you seen this green, spiny fruit before? They are pretty spiky and you gotta hold them carefully! So, until you live in Asia, then you won’t have heard:

“The KING of fruits!”

Durians are known as the King of Fruits. Yeah, I’m not so sure about that, but when in Rome… If you’re in Asia, especially around June onwards, it’s durian season and you’ll probably smell them first before actually seeing one. And you’ll wonder what is that awful, awful smell?

Guys, this fruit smells like in what I can only describe as dirty, smelly feet that has rotted over. That smell also travels and you can smell it from 20 feet away. It may just make you vomit in your mouth a bit, but they love that stuff over here. I honestly wish I could bottle that scent up so you can see what I’m talking about, of even better if I could make that picture above into a scratch and sniff so you can smell for yourself. HA But since I can’t, check out this video of a cat smelling a durian for the first time! 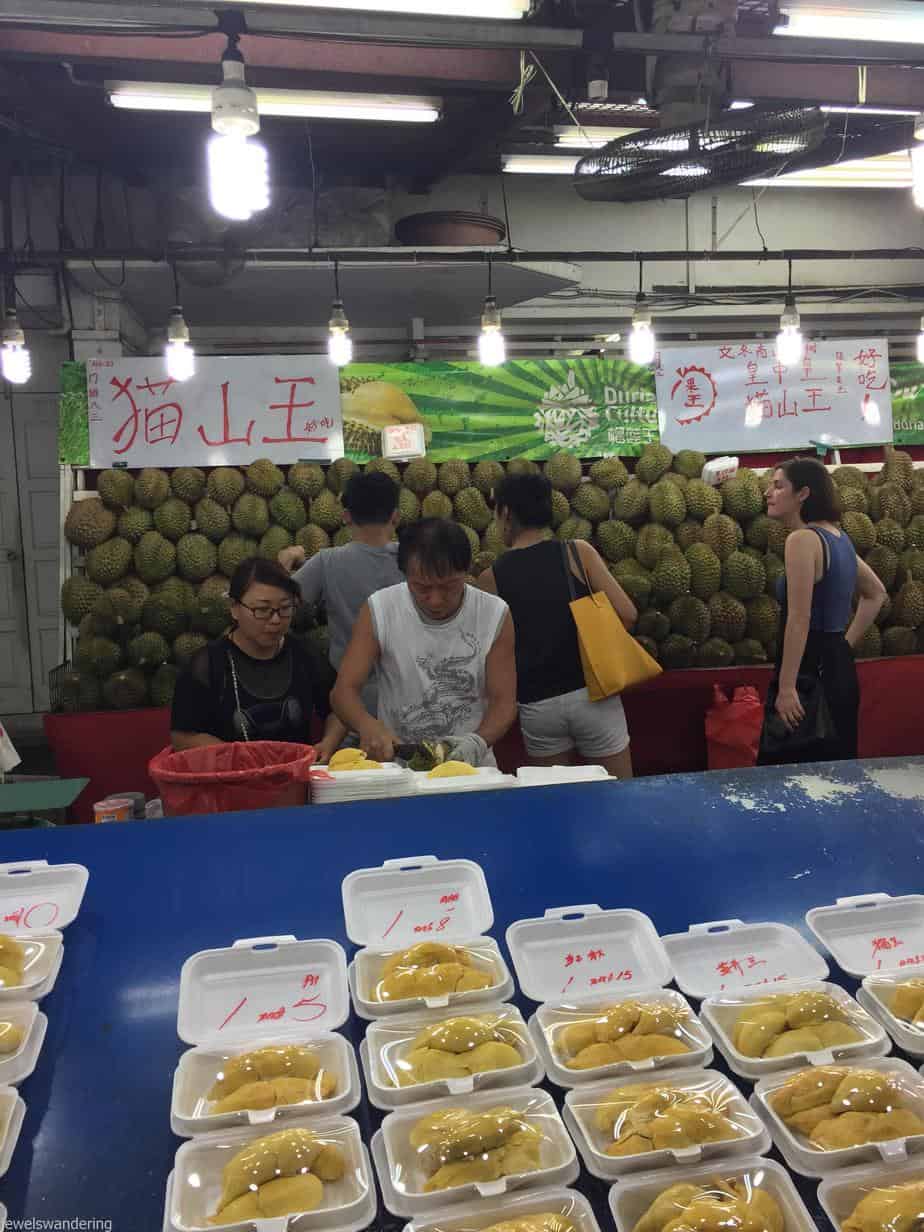 After 5 years in Sing, I’ve finally become somewhat desensitized to the smell of durians, to the point where I can actually smell the sweetness of it. So I decided that this was the year I’m going to finally stop being a wussy and go durian tasting. It had to be done, I cannot leave Singapore without trying it at least once!!

I mean, I know people who refuse to try it and honestly I don’t blame them! They smell pretty rancid and they look so weird. I’m not even going to say what I think it looks like, but it looks like some weird **** (rhymes with sick)! Sorry, I do have a strange imagination. Don’t judge. 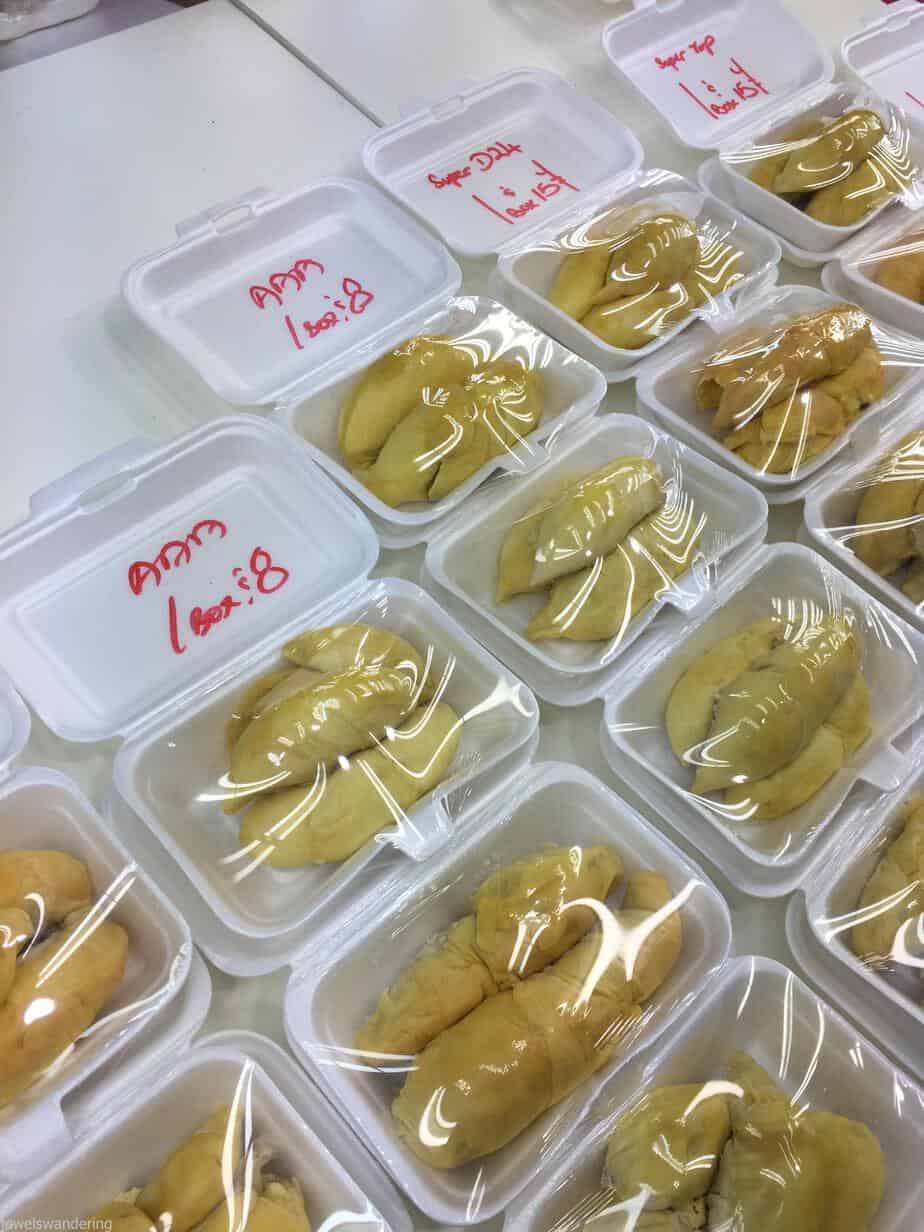 Anyway. Let’s get back on track and let’s talk durians! Durians are not similar to jackfruit, let’s get that straight! Durians are super high in calories – an average 1kg durian has almost 1400 calories! Holy smokes! – but they’re super nutritious. So that was my little PSA for the durian!

My friend told me the other day she was looking to try durians and I said I would go with her. At least I’d have a durian virgin to try it with. So last week, she organized a little outing with a couple of other people she knew that had also never tasted them before. When in Singapore, Geylang is where you want to go for durians. The beginnings of Geylang is practically one durian stall after another and even if you drive by on this road, you can’t help but get a whiff. In fact, durians are banned from public transportation here in Singapore. That’s how much they stink. 😉

So you pick out your durian – you can buy them already cut up or you can get a fresh one. They’re not cheap!! We chose to try to the Black Pearl variety and our durian weighed 2kgs and cost us S$50 ($37). The guy then cuts it up for you. I had a picture of him weighing our durian, but technology failed me that night and I don’t have that picture. Sigh. We got ready to eat them, but first! Plastic gloves! Why you ask? Well. You don’t want durian smelling hands. That smell is pretty insane – definitely super strong! But for those that like durians, that’s where the saying “Smells like hell, tastes like heaven” comes from. 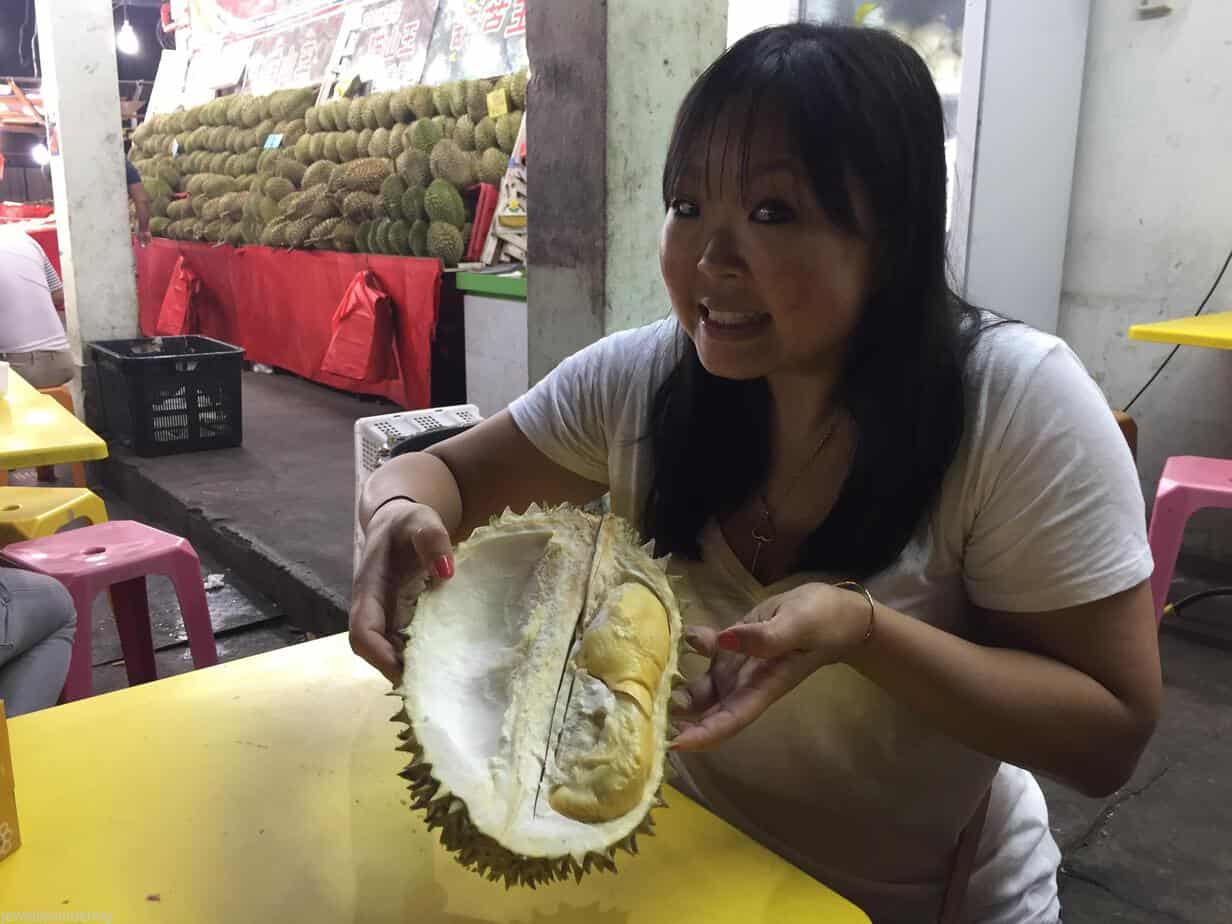 I surprisingly didn’t gag at the smell once the durian was open. But once I had a little piece in my mouth, that was a whole different story. Holy f*&U*#&@. All I could think was how much it tasted of fermented, rotten onions. I got a tissue and politely took it out of my mouth as soon as I could, but my body was internally gagging. I needed to get that taste out of my mouth and ordered a coconut water. My friends actually enjoyed it! But not enough to try all the other different varieties that night – they were overly optimistic! The rest all managed to eat it with much more grace then I did. Ben actually enjoyed it and had no negative reaction to it. He loves his stinky cheeses, so this definitely prepared him for the experience. The girls said that after the first bite, they could taste the sweetness and it was much easier to eat. There are some fibrous parts to the fruit, but all in all it’s meant to be quite creamy.

So, I decided I would give it another go. I put a little in my mouth again and as soon as it hit my tongue, I just completely gagged and spat it out. I didn’t even bother trying to be lady like. That was me done with durians. Never again. It was so foul for me. Just no. I really wanted to like you, durian! But I succeeded in not vomiting in my mouth, so that night was a win! The rest of the crew managed to finish it, though they were complaining of durian burps later. Yuck. 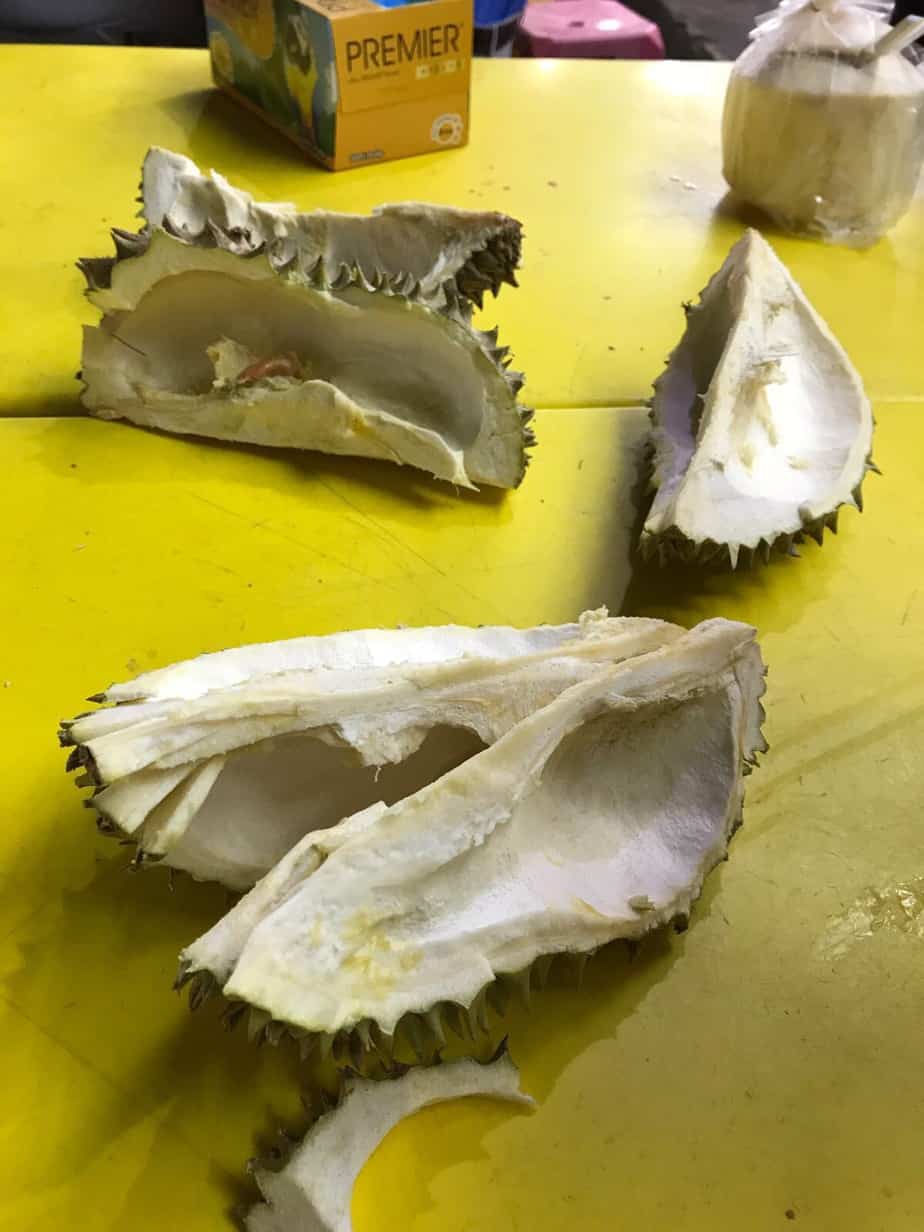 Durians are known to be quite heat inducing in the body, so we finished it off with some rambutans to cool the body off. Rambutans are super good! The others bought some fruits to go before we called it a night. Local fruits are a lot cheaper then cherries, strawberries, etc.

So let’s cross that off the bucket list and file it under “Things I’ll never do again!”

Would you be adventurous and try the King of Fruits? Or have you tried them already?

If you are in Singapore and want to try, just head down here and there are a few stalls to choose from.