I don’t need to say what day it is today. It’s one of those days where you can never truly forget. It’s forever etched in my mind and in my soul, a day that I can’t talk about without tears coming to my eyes. 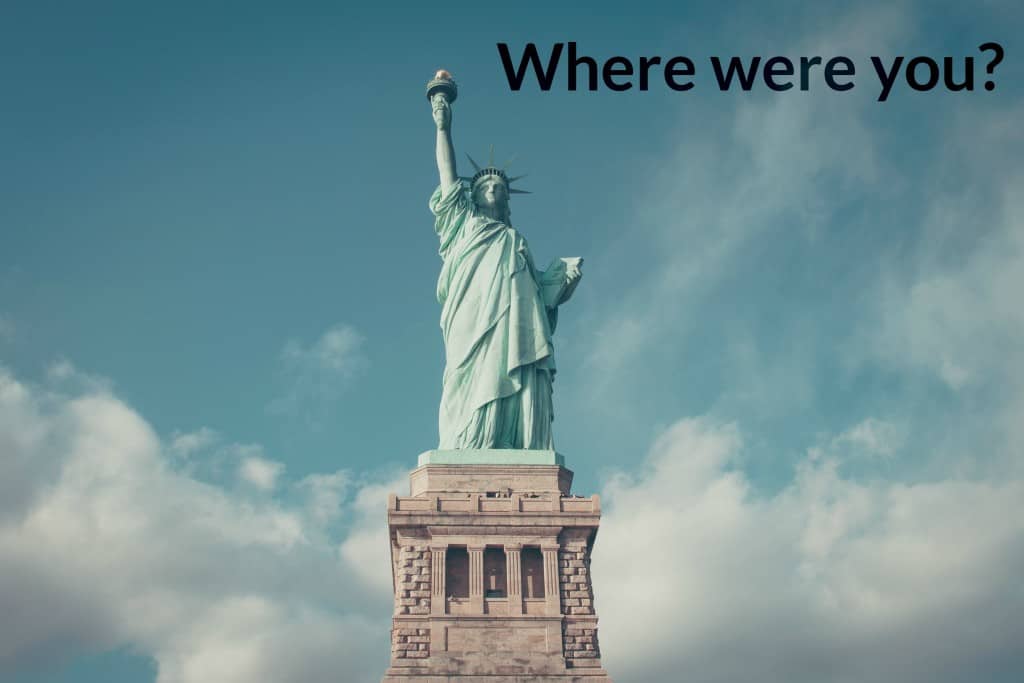 Even after 14 years, I still remember this day vividly. I can close my eyes and I am transported back to that day.  With each passing year, it has only gotten a little bit fuzzy, but the ache in my heart has been etched inside, tugging at me with its unrelenting grasp. But while the actual day never fails to bring goosebumps to my body, its the days afterwards where my feelings have a vice like hold on me which leaves me almost paralyzed.

The night before was beautiful. The night sky was so clear, you could see for miles. I was with my best friend, hanging out at the corner of 34th and Park where we were still giddy over our amazing summer in Barbados.  Adding to that excitement was the high of starting our senior year at NYU, where it seemed like we literally had the world at our feet.  The possibilities seemed endless..

In the middle of our chatter, there was a moment where we both just stopped talking. Gaby said to me, “Doesn’t the World Trade Center look amazing tonight?” I stared off into the distance where I had clear views of the WTC,  the lights twinkling from the buildings were a magical sight against the night sky and I nodded in agreement.  At that moment, I had an overwhelming rush of emotions go through my body, I truly felt so blessed to be alive and living in one of the worlds most amazing cities ever.  The siren of an ambulance broke my reverie, and I said to Gaby that we should look to donate blood in the next few days.

I had set up my classes so that on Tuesdays I didn’t have to be down on campus until 12;30 or 1pm.  I loved to sleep in and it also meant that I would have 4 days weekends.  Score!  That Tuesday morning it was particularly loud.  It was even louder than normal and if you’ve ever been to Manhattan, you know how loud of a city it is.  As I lied in bed that morning, I heard this rumble of an airplane above me.  It did strike me as odd because it was so damn loud.  It felt like it was in my room but I didn’t give it much thought once the noise receded.  I just thought that maybe there was a movie being made somewhere nearby, but I was dismayed at being woken up.  Sleep is very important in my life… A few minutes later my mobile is ringing.  I am again super annoyed to hear the ring of the phone, but it’s my friend calling from Tokyo.  What? Why is D-Boy calling me at this hour?!?!

I shrugged off the sleep encasing my body and as D’s voice filled my head, he’s talking too fast and was clearly agitated. I told him to slow down and as he does, he is finally making sense in my head. I get immediate goosebumps over my body and I walk the two steps to turn my TV on.  D and I hang up after a few minutes and I’m in shock. The voices of the news reporter are just jumble mumble in my brain.  I watch in disbelief at the WTC in flames, the thick plume of smoke covering the top half of my television screen.

I snap back and my mind is racing.  I call my parents in DC and I talk to my dad.  I then call my brother. I know he has no reason to be down at the WTC, but he lived further downtown then I did and you just never know.  Thank god, he’s fine.  I then called Gaby and together over the phone we watched in horror as the second tower collapsed and the gasp of the news anchor filled my apartment. There are no words, really.

As the last towers fell, there was an audible silence that enveloped the city.  The city had come to a standstill. The horns were no longer honking, the bustle of city living just stopped.  My body was numb, but my mind was ticking along and all I could hear was the silence, screaming at me.

Gaby and I decided to meet up at Bellevue Hospital.  We were going to donate blood, it was the least we could do.  I stepped outside of my building and it felt like the air was even heavier with the deafening silence.   As I walked the ten blocks or so down to Bellevue, I noticed that the survivors had started to make their way up 2nd Avenue.  A few, but a constant stream of them, walking alone; tired and ragged after having walked a few miles by then.  I remember their expressionless faces that were covered in soot and dust; their eyes dull and glazed with tears streaming down.  They looked like zombies.

There was a massive crowd at Bellevue, obviously Gaby and I weren’t the only ones looking to donate blood.  We all patiently stood there, filling out the required paperwork for blood donation; chit chatting quietly with the others, everyone clearly in shock.  The silence was occasionally broken by the wails of sirens as they raced down 2nd Avenue and the roar of the fighter jets as they flew overhead.  After a while, one of the hospital workers came out.

“We thank each and one of you for coming to donate your blood today.  Unfortunately we will not be needing it.”

Or something along those words.  And that’s when it hits you.  They don’t need our blood because there aren’t that many survivors.  My blood went cold.

Gaby and I left Bellevue along with the others.  We decided to head down to Union Square.  When we got there, there were a lot of people sitting on the grass, in circles, hugging each other.  Everyone spoke in hushed tones as to not disturb the city.  I remember the acrid, smoky smell wafting up from downtown; looking at the skyline and seeing the dark plumes as the WTC burned against the bluest of skies ever. It was all just so surreal.  What were towers of glass were now just towers of smoke.

The cops had barricaded 14th Street so we couldn’t go further downtown.  We just hung out there most of the afternoon really, it sort of became a meeting point for other NYU students.  As the hours passed, we saw some of our friends and we were able to exchange news.  I found out that by luck, a couple of my girlfriends had overslept that morning and were late to work.  Sometimes being late to work can save you…

I found out a few days later that my friend had been saved by a stranger.  She was just getting out of the subway to go to work when the first building collapsed.  Someone saw her and quickly pulled her into a store as otherwise she would have been swept away.  I remember her telling me the immense amount of dust that she swallowed, her trying to breathe and cough up the dust.  The stories don’t stop.

The days following, the city, still in shock got back on it feet even though it felt like we were in pause. But that’s the thing with time, it doesn’t stop for anyone and the rest of the world slowly went back to their normal lives. Being in Manhattan in the following days and weeks, every day was a reminder of what had just happened.  It’s like being trapped in your memories, where everyday is played out again and again with just a slight different variation.  The city was wallpapered with pictures of the missing; their smiling faces looking at you, begging to be found.

With time, you inevitably fall back into your routine; the hustle and bustle of the city picked up again, but the music it churned out was just a little off.  Those smiling faces plastered on the walls of the city and in the subway stations were looking a little worse for wear.  But you see, its exactly that.  It’s those faces that you couldn’t escape, the faces that haunt your mind for weeks and weeks.  That was actually the hardest part for me.  A horrific attack was made that more personal when you see their smiling faces staring back at you every single day.  I would stop and stare at the sea of faces in front of me – every nationality you could think of was represented there.  My heart ached for all those who were lost that day, but after a while, I wanted to rip them down because I couldn’t bear to see their faces anymore.  It was an attack on American soil, but every country was attacked that day.

I wasn’t physically hurt that day, but I know I didn’t come out unscathed.

**For all who lost their lives, you will never be forgotten.  To all who lost a loved one, for your courage to keep moving forward.**