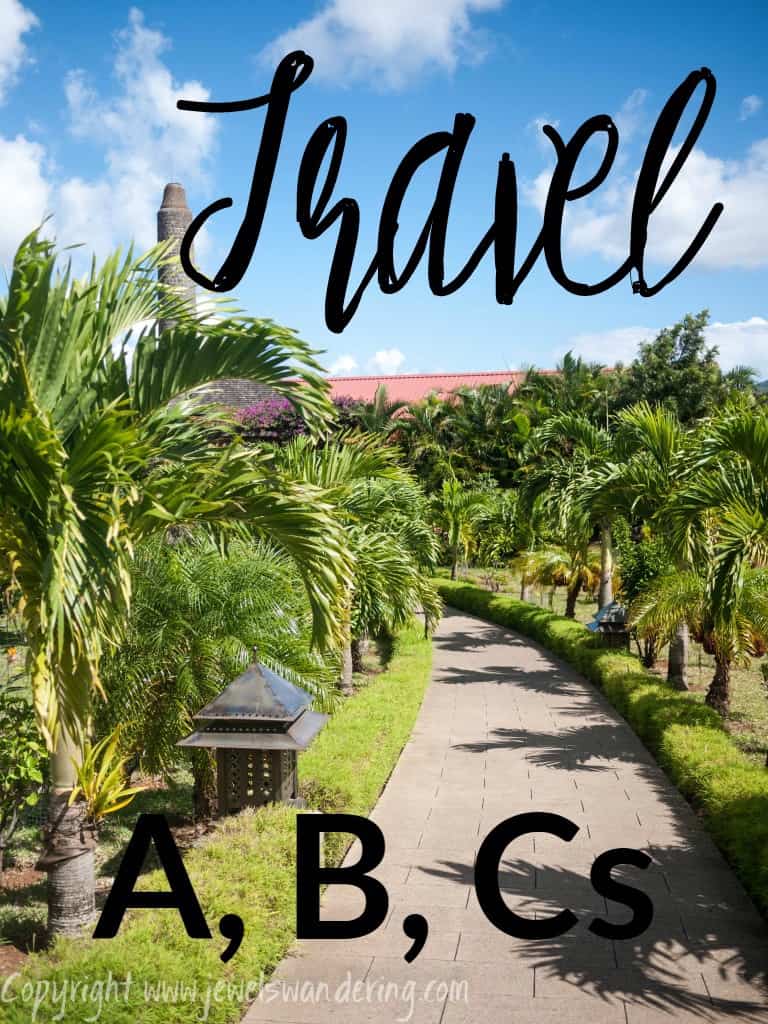 Happy Monday! It’s my last full week at work before I head off and I am so excited!! My London schedule is going to be jam packed and I just found out this weekend that one of my best friends is also going to be there! I haven’t seen her in 4  years so I cannot wait!!  How was your weekend?

Well, today’s post is slightly long, I  saw Jen’s post and thought this could be fun, so hope you make it through the end! And would love to see a similar post on your blog… 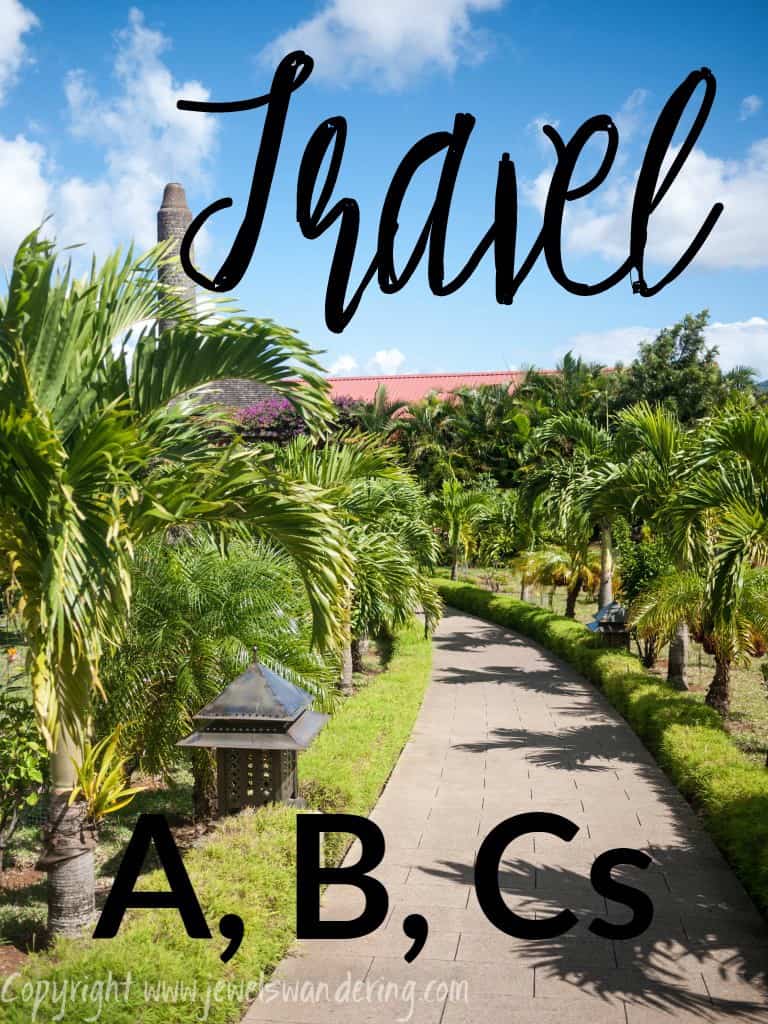 A) Age you went on your first international trip: I think I was 6 or 8 months old, we were moving to DC from Brazil.

B) Best foreign beer you’ve had and where: Ooh, definitely during my time in Brussels.  You can try a different beer a day for a year there.  Now my favorite? Hmm, I do quite like the Framboise Beer from Le Mort Subite, but Hoegaardens are quite nice.  To be honest, I’m not really a beer drinker.

C) Cuisine – favorite: How do you pick just one? I love Brazilian food, Italian, Japanese and Thai.  But I also do love me some French fare as well.

D) Destinations – favorite, least favorite, and why?:  I’m so in love with Zanzibar and would love to go back.  Seriously the most amazing beaches, ever! As for my least favorite? I would have to say Sharm el-Sheikh in Egypt.  Though I had a good time only because I never left the resort.  Plus I was on my own and I didn’t really fancy going out on my own as a female as I knew I would get harassed. Even in the resort itself, there was one waiter who wanted to marry me and was trying to get me to give him my number. Umm, no. 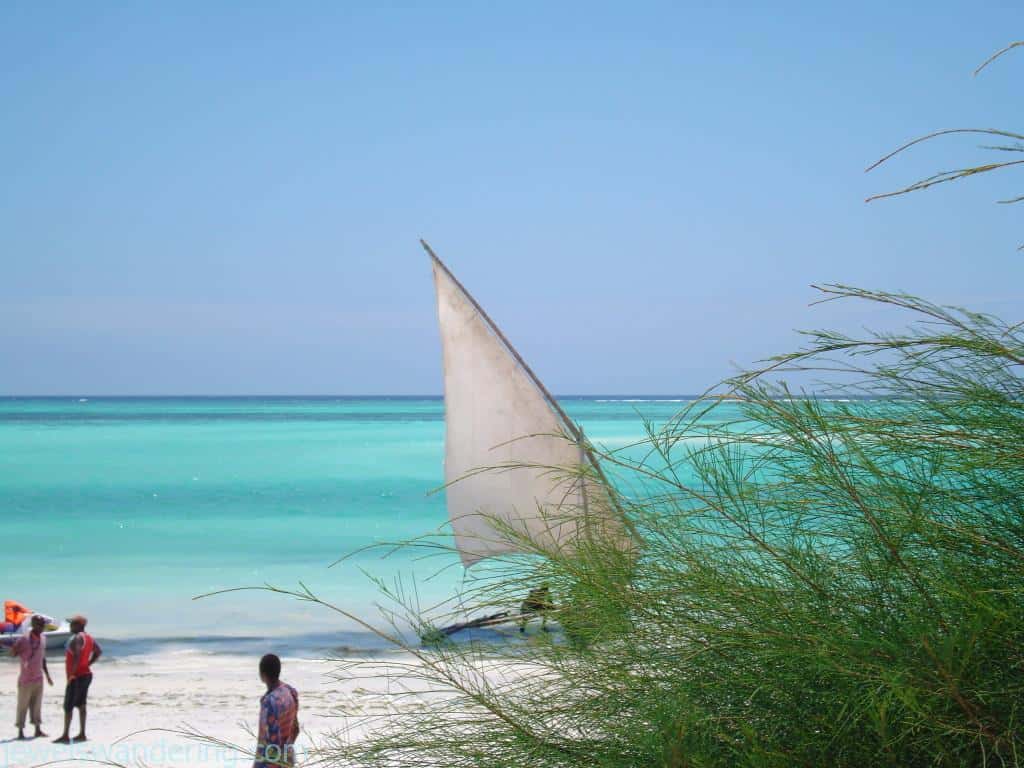 E) Event you’ve experienced abroad that made you say “wow”:  My most amazing trip ever was the safari I did in the Masaai Mara, Kenya. WOW.WOW.WOW. To be that up close and personal with these amazing animals was breathtaking.  I was able to see an impala or a gazelle give birth and it was so amazing to experience this and you can also feel the tension in the air as her herd gathers around her and keeps an eye out for the lions.  And it never struck me until it happened but as soon its born, he/she gets up right away and they run off.  Amazing!

F) Favorite mode of transportation: While traveling? Bicycle or a tuk-tuk.  Easy to get around and you experience more of the place. Otherwise, your own two feet will do! 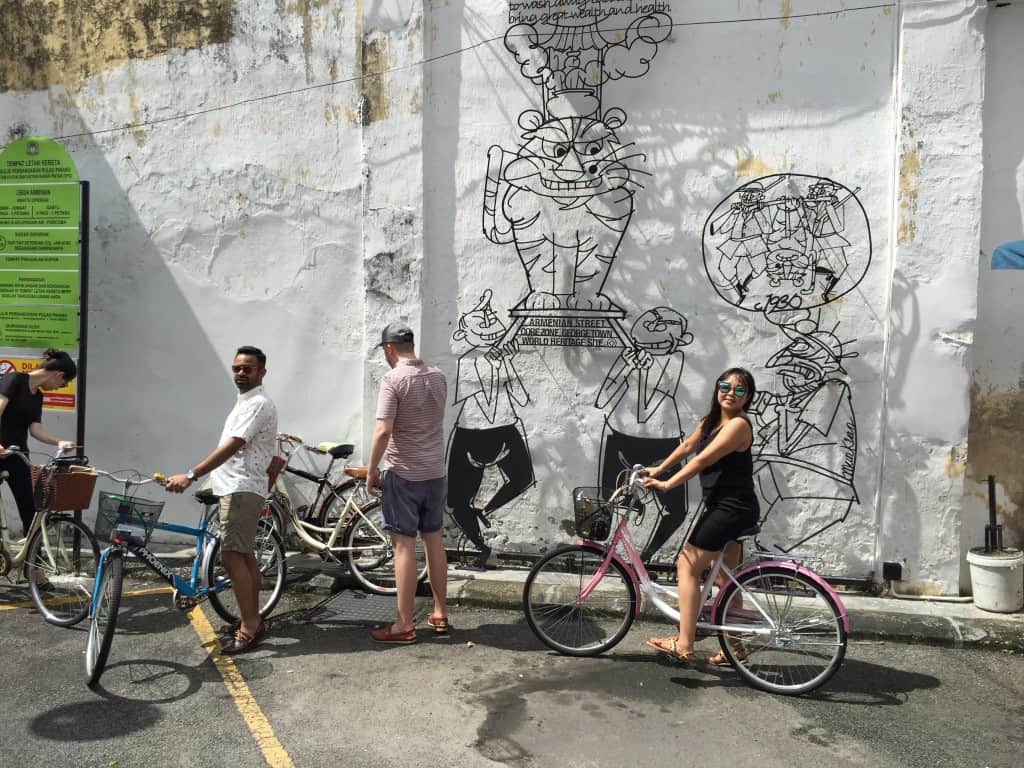 G) Greatest feeling while traveling: Being out of your comfort zone; realizing that there is this world out there that is so different from what you know and being able to experience it.

H) Hottest place you’ve ever traveled to: Hmm, probably a toss up between Dubai and Egypt during the summer. Argh, never again! But at least the heat in Sharm el Sheikh was dry, whereas Dubai was humid.

I) Incredible service you’ve experienced and where?: Japan is known for their incredible service and they do not disappoint.  It’s easy to think that good service will be had in South East Asia, but that is a myth! Although Thailand is pretty magical as well!

J) Journey that took the longest: The first time I went to Indonesia back in 2005 was a doozy.  We flew from JFK to Seoul which was a 14 hour flight and there we had an 11 hour layover.  And silly me didn’t realize that the flight to Jakarta from Seoul was another 8 hours.  I was a bit special back then, just assumed it would be close by because you know, you’re in Asia..! HA I got to Jakarta on no sleep and was looking forward to getting to my hotel, but I was driven straight to my friend’s house where the pre-wedding celebrations were taking place.  Everyone was dressed so nicely and I rocked up with oily hair, jeans and a t-shirt looking cracked out. Great first impressions!

K) Keepsake from your travels: It depends.  I like to get something that is unique to that place but if I don’t find anything that interesting, then I don’t get it.  My favorite souvenir was the chest from Zanzibar I picked up, would love to have a bigger one! 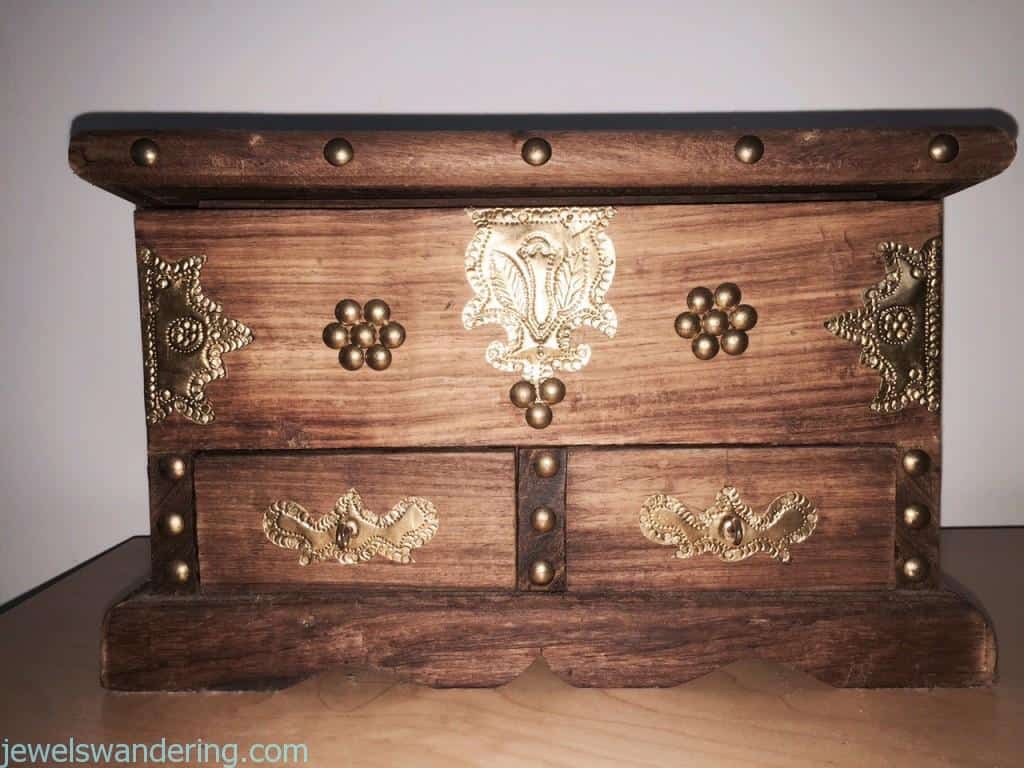 L) Let-down sight, where and why?:  Ooh, definitely the Manneken Pis in Brussels. It is a cute little statue of a naked boy peeing into a fountain.  You think it’s a big statue, but it’s actually quite small.  It is cute though, I’ll give it that.

M) Moment where you fell in love with traveling: I’m not sure I’ve ever experienced this aha moment. I’ve been an expat brat my whole life where traveling was just part of life and I’ve carried on since I’ve been an adult just because it’s who I am as a  person. Does that make sense? O) Obsession – What are you obsessed with taking pictures of while traveling?:  Doors! There’s something about doors that I really love and how different countries have their own ornate doorway, or even a simple one that is brightly colored. 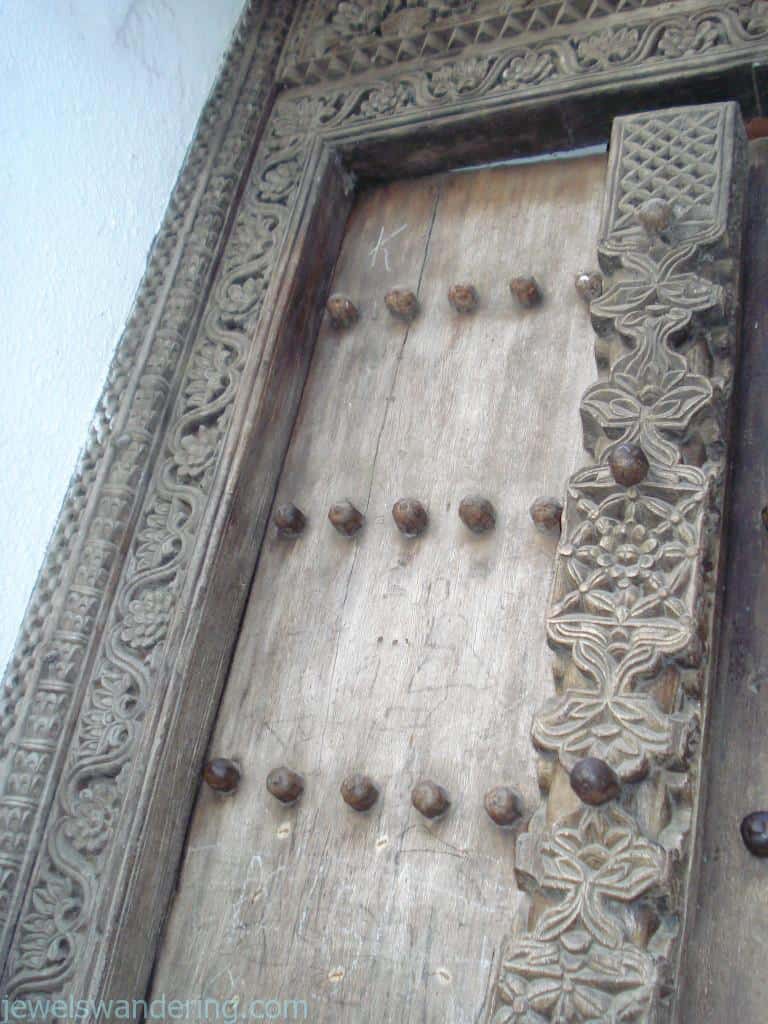 P) Passport stamps – how many and from where?: Oh my goodness, I’ve filled up so many passports in my life, I have no clue how many stamps I’ve gotten along the way. I’ve been blessed with having traveled quite extensively. I think I’ve been to 35 countries so far with my favorite stamps being from Tanzania, Kenya, Israel, Mauritius and Barbados.

Q) Quirkiest attraction you’ve visited and where?:  Hmm, I would probably have to say it was the Sex Museum in Amsterdam.  It was especially interesting to see the large penis. HA

R) Really frightening – where’s one place you’ve visited where you felt unsafe or  uneasy: It’s not that this place is unsafe, but I was on my own in Krabi, Thailand and in my room at night. I was lying in bed when someone tried to open my door. Luckily, I always put that bolt thing on the lock so the door can’t fully open. But whoever it was, managed to open the door and the latch caught. At that point, in a shaky voice I said, “Hello?” And whoever it was quickly closed the door and left. I don’t think it was an intruder, just someone who went to the wrong room, but holy crap, I was seriously crapping my pants and I couldn’t fall asleep for the longest time!

S) Splurge – something you have no problem spending money on while traveling: If you have been around here for a while, I think it’s safe to say that I’ll splurge on food.  There are, of course, a load of cheap eating options when travelling around SE Asia, but I will reserve a table at a super nice restaurant. As much as cheap food is good in the belly and on the wallet, I like to see how they interpret their local dishes into haute cuisine.

T) Touristy thing you’ve done:  Now, I’m not sure how to interpret this..? I mean, when you travel, you’re a tourist and you’re most likely going to be doing touristy things, no? Or does it mean, a touristy thing you’ve done in the place you live in?  Hmm, I will go down this route then…. I’ve been on the London Eye when I used to live in London and I’ve gone up to the Empire State Building when I used to live there. I’m sure I’ve done others.  How about going to see the Merlion? 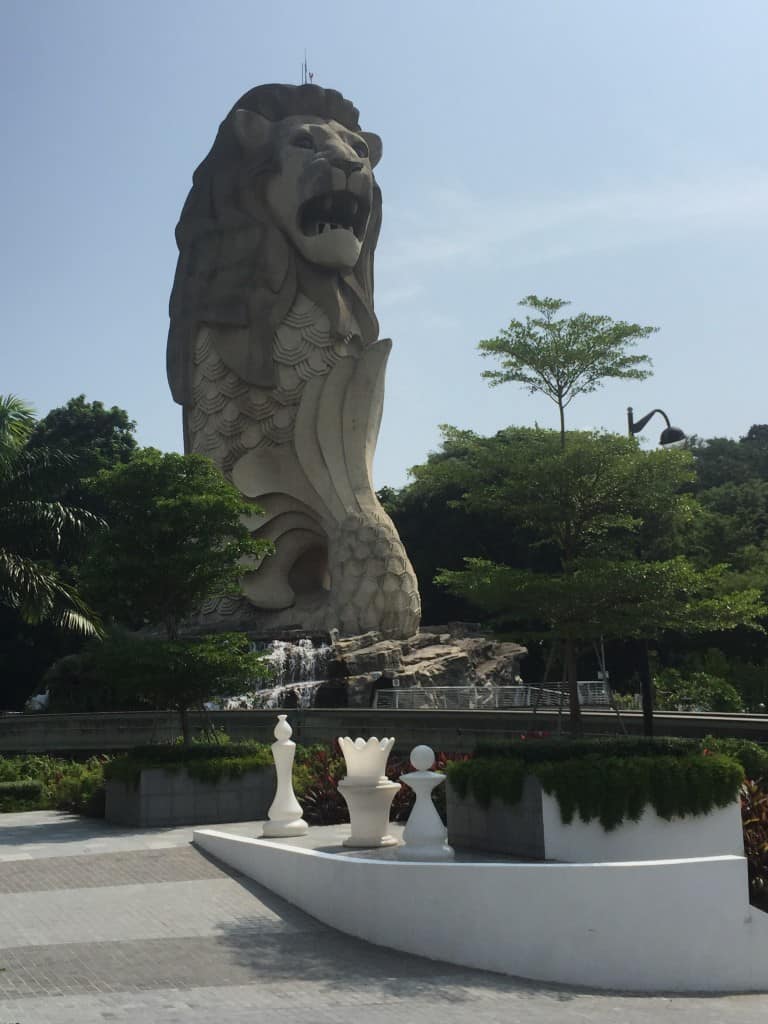 U) Unforgettable travel memory:  There was this summer I spent in Barbados with my best friend, Gaby. By the end of the trip, we were broke.  Like, I had $5 in my bank account broke.  We were flying back to New York via Puerto Rico, but our flight leaving Barbados was delayed.  And we were on separate flights back to New York for some reason.   Anyway, I would have just made my connecting flight, but she had missed hers.  So like any good friend, I missed my flight too.  Luckily we got put up in hotels and got meal vouchers.  Those meal vouchers saved our lives! Seeing that we had a whole night, we hung out in the hotel casino, looking for quarters on the floor so we could play on the slot machines.  We caught the eye of this older guy who had wads of $100 bills.  We were hoping he would give us one so we could play, but no luck.  He just told us that we could charge whatever we wanted to his room bill.  We didn’t but then as our luck would have it, he was staying in the room next to ours. We walked the other way so he wouldn’t know and steered clear of him. #creepyoldmen

V) Visas – how many and for where?: Oh man, another question that’s hard to answer! Being on a Brazilian passport, I do usually have to check if I need a visa or not.  For the most part, a Brazilian passport isn’t too bad but around SE Asia, if you need a visa, you can usually do visa on arrival, so it’s not too bad. So how many have I had? Hmmm. my last passport it was just for Cambodia, Vietnam, Indonesia, Japan.  Guess I didn’t need as many visas as I thought! 😉 W) Wine – best glass you’ve had while traveling:  Now, the name of this wine is now quite unfortunate, but I was having dinner in Malta with an ex and we ordered a bottle of Maltese wine.  This really nice crisp with a slight fruity palette Chardonnay.  It was called Isis. I liked it so much, when a friend went to Malta, I asked him to pick up a bottle.  I wonder if they’ve re-branded?

X) eXcellent view and from where?:  When people come to Sing, they automatically want to go to Ce La Vie on top of Marina Bay Sands (MBS).  But, I much prefer the views from One Altitude as you get to see MBS.

Y) Years spent traveling: Since I was 6-8 months old… My whole life!

Z) Zealous sport fans and where?: That is hard… Could be the Brazilians or the English or the Spanish with their football (soccer) or maybe even the Kiwis with their rugby?  Who knows!